The Road to Conservation

The Road to Conservation
By Vicky Boyd

The family history of Jim Jorgensen and his sisters, Joanne Mills and Janice Jorgensen, is deeply rooted in California agriculture.

The three were raised on a farm where their parents, William P. and Elinor Jorgensen, grew walnuts and row crops just outside of Gustine, California. The siblings’ grandfather, Jacob Jorgensen, emigrated from Denmark as a 15-year-old to avoid serving in the German Army before World War I. He came with other young Danish men, who secured work in the San Joaquin Valley on farms growing dryland barley, wheat and oats.

Their grandmother, Marie Jorgensen Andersen, became a widow at 32 with two young children in 1922. Yet she managed to hold onto the family farm even during the Great Depression. “My grandmothers’ strength, and ability to keep the farm under those circumstances, is really what made me realize that we need to do our part to ensure it stays in agriculture forever,” Janice shared.

None of William and Elinor’s three children went into farming, with Jim and Joanne pursuing careers in education. Janice obtained bachelor’s and master’s degrees education and went on to several leadership roles focused on training and management, primarily in the private sector, in addition to the Peace Corps, and Federal Emergency Management Agency. Yet the three never forgot their roots and wanted to preserve them.

“Knowing the history, even though we didn’t go into farming, we saw what our mom and dad thought of it,” Joanne 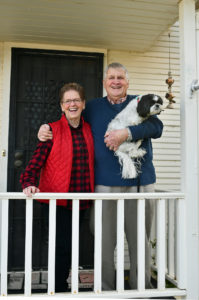 said. “By their actions, we knew, and we knew the history of how the land came into our family. It was just, “Oh, gosh, we want to do this.’”

Adding impetus to their quest to protect the family farmstead, which dates back to the early 1900s, was a proposal to divide nearby farmland into 20-acre ranchettes.

As a tribute to William and Elinor, the three siblings successfully placed the family’s 290-acre farmstead into the Central Valley Farmland Trust, the predecessor to the California Farmland Trust, in 2008.

Comprising mostly prime farmland, their ranch is planted predominately to row crops, including lima beans, wheat and alfalfa. Where their father once grew walnuts are 35 acres of young almond trees.

Jim felt so passionately about the importance of preserving working ag ground that he didn’t hesitate to join the California Farmland Trust’s board in January 2018 when asked.

“Jim is a valued board member as he brings the perspective of a landowner who has an ag conservation easement to the organization,” she said. “Our mission is to protect farmland and in doing so, we must stay vigilant to the needs of the land and the industry. Jim’s passion for protecting the land and ensuring the productive capability of agriculture is an invaluable contribution to CFT.”

Joanne said she understands why her brother was asked to serve.

“I can see why he would be good and say, ‘yes, I want to do it,’” she said. “We’re really involved in our ranch even though we’re not farming it. We’re all in our 70s. We’re all still learning, and we still want to learn.”

Jim isn’t bashful about promoting conservation easements, either. During a recent tour of the family’s farmstead, he stopped his vehicle to talk to a passing farmer. As part of the conversation, Jim invited the other farmer to give him a call to find out more about farmland protection.

The road to a conservation easement

Jim said he first heard of conservation easements at a local American Farmland Trust meeting in the mid-2000s. He followed up with Bill Martin, then-executive director of the Central Valley Farmland Trust, and liked what he heard.

With backgrounds in education, Jim, Joanne and Janice did their homework and researched what was involved in obtaining a conservation easement. They also met with John and Jeani Ferrari of Turlock, who had successfully placed the family’s 270-acre Humboldt Ranch in the Central Valley Farmland Trust in April 2005.

The three began then the process of obtaining an agricultural conservation easement in 2006. Back then, such an effort was a rarity and took longer than anticipated.

Steve Bell was farming the ground for the family at the time and expressed concern that the easement might restrict his ability to farm. In 2008, the papers were signed, and the William P. Jorgensen Ranch was to be forever in agriculture.

A few years afterward, Jim said Bell expressed his gratitude, saying it lessened his worries about the future of the farm and simplified long-term planning.

As Jim explained, an agricultural conservation easement simply prevents the ground from being used for anything other than agriculture. But it doesn’t otherwise constrict cropping choices, farm management decisions or day-to-day operations. 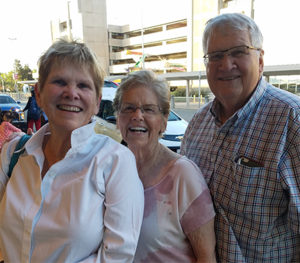 Jim, Joanne and Janice’s cousins, who inherited the adjacent 275-acre Hooper Ranch, have followed in their footsteps, successfully obtaining a conservation easement in 2018.

Joanne lives in Merced, while Jim resides in Rocklin and Janice calls Massachusetts home. Although they have Jim Ventura farm their ground, the three remain actively engaged in the operation. Joanne spent 25 years teaching first grade, and she said she loved every minute of it. But there’s a small part of her that is wistful for not having paid more attention to the farm as a child.

“In retrospect, as involved as we’ve gotten with the ranch and farmland trust and hiring farmers, there’s a part of me that wishes I knew more,” Joanne said. “I think growing up, you don’t realize, you don’t appreciate and don’t understand the importance of it.”

Jim, Joanne and Janice have tried to pass along their appreciation of agriculture to the next generation.

Jim and Janice never had children. Of Joanne’s three children, two followed in her footsteps and became teachers and one is an attorney. Nevertheless, they remain connected to the family farm in a small way.

“They weren’t ag oriented at all, but they cared about their grandfather and grandmother and that we’re committed,” Jim said.