Growing up, Webster Williams’ and Bonner Mendez’s aunt — Alberta Webster Lewallen — used to tell them, “You can never create 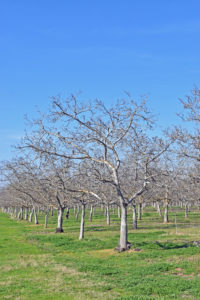 This was something Lewallen had heard from her father, Clarence Albert Webster, when she was young.

Williams and his sister, Mendez, have taken that lesson to heart. Both own farms only a few miles apart near Linden, California, and they both successfully obtained agricultural conservation easements through the California Farmland Trust for their individual pieces of ground in October 2019.

But that wasn’t the first time the family had committed to preserving farmland. Williams and Mendez recalled their mother admonishing a flood control district maintenance crew for removing vegetation along the banks of the Calaveras River as it passed their property.

“’Don’t ever do that again — cleaning out the creek bed,’” Mendez remembered her mother saying. “’That’s habitat for the animals.’”

In 1963, the family deeded development rights in perpetuity to the California Department of Fish & Game for one of their ranches along the Calaveras River. The action was similar to a conservation easement at the time.

“So we’ve grown up with the conservation and preservation of land,” Williams said.

A place to relax and grow up

In the early 1930s, C.A. Webster bought a ranch in the Linden area. Now known as Webster Ranch, it was a place for him to relax with his family on weekends. He developed an interest in ranching and raised Hereford cattle.

Williams and Mendez’s mother, Marjorie Webster Williams, as well as her two sisters built houses near Linden “within yelling distance” of one another, and the 10 cousins grew up and played together.

Their father retired from the lumber business in 1973 and bought additional ground along the Calaveras River already planted in walnuts. 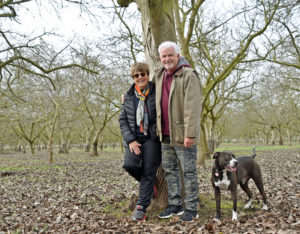 Mendez said she began thinking about an ag conservation easement for her ranch after attending a reception celebrating the Brandstad Brothers successfully obtaining protection for two farmland parcels near Stockton in 2014.

“I got all of these materials and said, ‘I’m going to do this,’” Mendez said. “Our families and our children understood that it continues to be important to “’never sell the land’ and that the philosophy of preserving this wonderful heritage is a legacy that can be handed down to future generations.”

She shared the information and her thoughts with Williams, who had a similar reaction.

“My kids are very dispersed, and I don’t think they’d want to live here,” Williams said. “I think it was pretty much the understanding that the best use of it was a farm, so it was never an issue. They were always in the loop.”

Of Mendez’s three children, her son, Will Mendez, has chosen to live on the family ranch with his wife, Jessica. He currently manages a young walnut orchard.

As was the case when their father grew walnuts, Williams and Mendez still have FFD Orchards and Frank DeBenedetti custom farms their mature orchards.

Williams’ and Mendez’s farms join the Messick Farm, two parcels of walnuts and cherries totaling 84 acres also near Linden. Owner James Messick donated the conservation easement on his properties to the California Farmland Trust in July 2018.

“Protecting these key areas builds upon an important cluster of farmland that has unique natural resources and needs to be protected to ensure farming remains an economically viable industry in California,” said Charlotte Mitchell, executive director of the California Farmland Trust.

The agricultural conservation easements on both the Williams Farm and Mendez River Ranch came to fruition as part of a partnership among the landowners, the California Farmland Trust and the Natural Resources Conservation Service (NRCS).

To be considered, the farm or ranch must have at least 50% prime soils and be suitable for growing crops, she said. Consideration also is given to proximity to other protected land, proximity to wildlife habitat and riparian areas, and threat from potential development or urbanization, to name a few criteria.

Although Williams’, Mendez’s and Messick’s farms are within a predominately agricultural area and near the rural community of Linden today, that doesn’t necessarily exempt them from urban threats, Mitchell said.

“Working diligently to protect these working landscapes that have prime soils, water availability and other natural resources early provides a signal to local jurisdictions that agricultural use is forever protected,” she said. “Agricultural conservation easements are a tool that farmers can use to remove the uncertainty of adverse land uses, and they signal to local planners that urban development should be confined to appropriate areas and not allowed to sprawl on to agricultural lands.”

The Williams Farm, for example, is nearly all prime farmland other than the creek that passes along one edge, Palmer said.

Mendez said she remembered that when their father purchased the ground, it was planted to alfalfa and tomatoes. W.H. Williams tried planting cherries, but the trees succumbed to disease. The walnuts, however, flourished.

Abutting the property is a small creek that’s an offshoot of the Calaveras River. Much like his mother, Webster Williams has kept it in native vegetation.

The 251-acre Mendez River Ranch, which is planted to walnuts and irrigated pasture, also has mostly prime soils and is considered “farmland of local importance,” Palmer said.

When their grandfather, C.A. Williams, bought the ranch, it was entirely pasture. The family began pumping water, making them the first to have pasture irrigated on a contour.

Slowly, the family has converted ground over to walnuts, with about 136 acres currently in trees. The remainder is leased out but eventually will be planted to walnuts.

Mendez also is applying for Environmental Quality Incentive funding through NRCS to help plant native vegetation around a small pond.

“We want to start creating a wildlife area in the back of the ranch,” she said. “It’s not even an acre, but it runs along the back of Mosher Creek. There are also many other programs we’re both interested in — cover crops for the orchards and soil conservation programs — to name a few.”