Standing on the family’s original “Home Ranch” near Ballico, California, Gail Ferrari Martin recently described the arduous journey her father took from a teenager on his own to becoming one of the world’s top canning peach producers.

To honor that hard work, Martin said she didn’t think twice about placing the Home Ranch in the California Farmland Trust in 2019 to protect it from development and permanently keep it in agriculture.

“Everyone in my family is on board with this,” she said. “This farm is so important to save. This is where it all began for my parents. We all admire what they accomplished, how hard they worked and how much they sacrificed. This was my way of honoring them.”

Americo “Albert” Ferrari was only 16 years old in 1927 when his father decided to pack up the family and move from Ballico back to Santa Rosa where they formerly lived. Seeing the wide-open agricultural expanses of California’s Central Valley, the young Ferrari decided to stay.

“He saw some opportunity here,” said Martin, his daughter. “Land was cheap and the ground was excellent. He just stood in the road watching until their truck was out of sight, then he turned, walked to a neighbor’s home, and asked for work.” 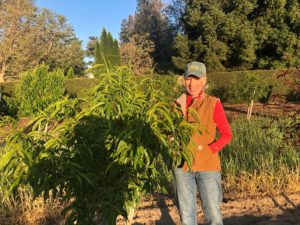 “Do you know how to prune peaches?” the neighbor asked. Ferrari replied, “No, but I can learn.” And for the next 11 years, recalled Martin, her father was a day laborer working the Central Valley’s fields and orchards. Along the way, he met and married Josephine Matson, and they lived in a tiny house, which rented for $5 a month. Some months they weren’t able to pay the rent, but the landlord allowed him to work it off.

“Those years were meager, and I mean really meager years,” Martin said. “We simply have no idea how difficult times were.”

But life changed for Ferrari one Friday afternoon as he stood in line at the Bank of America in Turlock waiting to cash his weekly paycheck. He was filthy from spending a day toiling in the fields, and the bank manager called him over “He just looked like a hard-working man and, evidently, this caught the eye of the manager,” Martin said.

Thinking the worst, Ferrari was hesitant at first. But the manager explained the bank had recently foreclosed on about 60 acres of ground nearby and needed someone to farm it. The orchard was just down the road from where Albert and Josephine were living.

“When my dad and mom drove out to take a look, there were a variety of crops planted on the property, but what caught dad’s eye was the few acres of peaches. This piece of ground became my dad’s catalyst”.

After about two years of farming the land, the bank offered Ferrari the 60 acres at an attractive price and rate. Now the farm was his and became known within the Ferrari family as Home Ranch.

World War II hit soon after, and the demand for canned peaches soared. Over the years, Ferrari would enjoy tremendous success raising peaches and, subsequently, he would buy additional farmland in the area. It was in the early seventies when officials with Del Monte, with whom Ferrari had a contract, told him he was the largest independent canning peach grower in the world. In addition to peaches, his farms raised grapes, almonds and walnuts. Today, Home Ranch is planted to 2-year-old almonds. 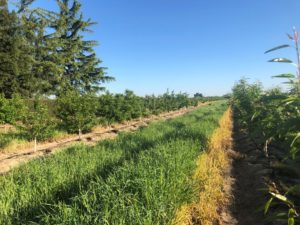 ‘Harvest was the best time of year’

Albert and Josephine built a modest home on Home Ranch and raised three children: Gail Ferrari Martin, John Ferrari and the late JoAnn Ferrari DiGiovanni. Martin and her siblings grew up working on the farm.

“When I was a kid, harvest was so much fun,” she said. “There were tractors, trailers and trucks up and down these roads constantly. This small community, full of wonderful farming families, was just buzzing.”

Gail and her husband, Mike, moved back to Home Ranch in 1990, when her twin sons were five years old. There the boys grew up playing in fields and having the run of the farm.

Along with the young almonds, in one corner near their home, is a fruit orchard featuring 64 trees of everything from citrus to pluots to persimmons to, of course, peaches. Mike selected the varieties, timing the harvests so they’d have fresh fruit nearly year-round.

Gail first became aware of farmland trusts after her brother, John Ferrari, and wife Jeani of Turlock had successfully obtained protection for one of their farms several years earlier.

“When I heard about the concept, I thoughts that this makes such good sense. I’ve never had a second thought and I’ve never looked back.” 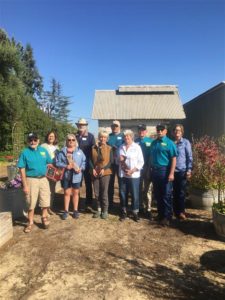 The six were the single largest set of transactions the CFT had completed at one time, said CFT Executive Director Charlotte Mitchell, adding that collectively protecting six farms in the same general area was very satisfying.

“It builds upon a productive agricultural area that will forever indicate this land is for farming and not for urban growth,” she said. “CFT has a dedicated team of staff and consultants who work to guide this process through to completion. While it takes time and a lot of hard work from everyone, it is a satisfying day when the ink dries on the easement and the land is forever protected.”

Altogether, CFT completed nine easements in 2019. Regardless of the farm’s location, Mitchell said working with families who are very intentional about their future in agriculture is heartwarming. 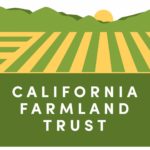 “By this very act of conservation, they are signaling to the next generation that agriculture is crucial and the land will be available to farm,” she said. “Specifically, for Gail Martin, it also honors the previous generation for their hard work; their dedication to the soil wasn’t for nothing.”

Home Ranch is currently farmed by Martin’s brother, John Ferrari, who, along with nephews, Darrell DiGiovanni and Damon Ferrari, also manage the other family farms.