A Family’s Story of Perseverance

To Jean Okuye, nothing is more important than her family and friends.

That’s why, in 1980, Jean didn’t hesitate when a sudden death left untended the family farm where her husband Paul was raised.  She and Paul immediately uprooted their two tween-age children and traded their swanky 7-year-old Santa Barbara tract-home for the creaky 60-year-old family farmhouse near Livingston.

“We all had to work together to survive,” Jean recalls.  Her lively blue-grey eyes dance as she remembers, with a nostalgic smile lighting her venerable features.  Then a piano teacher, she was raised on a farm but had never been a professional farmer.  She enrolled in a course taught by the local farm advisor, and armed with her newfound knowledge on pruning, watering, and “all the legal stuff,” got to work.  She with Paul (an agricultural biologist), with their reluctant children in tow, were quickly put to the test.  Two tractor fires, a house fire, and a host of other crises later, the family became bona-fide farmers.  “That’s one of the blessings about having a small farm,” Jean explains.  “You work together.”

Over the farm’s 111-year-history, “work together” has become the de facto family motto. Paul’s grandfather, Seinosuke Okuye, emigrated from Japan in 1907.  He landed in a peaceful enclave on the northern edge of Merced County known as Yamato Colony, where the Japanese-American community embraced him. The Okuye family purchased 80 acres, on which they farmed and hosted other immigrants.  In the early 1900s, the property was dotted with 13 small cabins which were home to newly-arrived “Issei” (first-generation) men eager to work their way to a better life.

Life in Yamato Colony wasn’t without difficulties.  In February 1942, Executive Order 9066 was signed by President Franklin D. Roosevelt, requiring relocation of Japanese-Americans living on the West Coast. Acting quickly to save the farms so carefully built up over 35 years, several Yamato Colony farmers worked together to form a co-op and hire a professional manager who oversaw the properties for the 2.5 years they were evacuated to camps in Colorado.  The Okuye family counts itself among the fortunate few who were able to return home.

Jean fondly remembers being welcomed to Yamato Colony when she married Paul in 1965.  When they returned to make Yamato Colony their permanent home in 1980, she quickly became a pillar of the community – giving piano lessons, going to church, even driving a school bus.  The neighbors reciprocated, lending equipment to replace tractors lost to fires and giving practical tree-planting advice as only farmers can.  In 2001, Jean found herself a single farmer.  Her children had grown and moved away, and her husband lost his battle with Parkinson’s Disease. But thanks to her Yamato Colony extended family, she has never been alone. 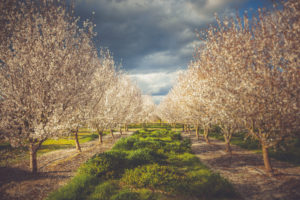 Honoring her family’s commitment to the land, in 2008, Jean permanently protected her farm from development.  “I applied for a conservation easement on this property because I saw the threat of a city three miles away coming in and wanting to expand,” she explains. Following an ancient Iroquois philosophy, she is always thinking seven generations into the future.  “If it’s going to affect seven generations down the road, then I shouldn’t do it,” she says with a shrug that suggests this thinking should be standard practice.  Cities developing unchecked falls into her “shouldn’t do it” category.  “Once you put a house on the land, it’s a one-time harvest,” she says.  “We have to be careful where we put houses and be sure that we build sustainably.”

Protecting the family farm is just one of the many ways Jean is promoting sustainability.  A tireless advocate, she is active in a handful of nonprofits.  From regularly appearing at lengthy county supervisors meetings, to writing grant applications at 3 am, she has an Energizer-bunny like dedication to her cause.  Whether her latest project is healthy soils, solar panels, or farmland conservation, it all ties together.  “It’s all for saving farmland and taking care of our earth,” she says.  “I’m just blessed to be 79 years old and still be able to do this stuff.”

Jean’s never-ending advocacy hasn’t gone unnoticed.  Plaques, certificates, and letters bearing official signatures adorn the walls of her open concept living space.  “She’s a jewel and a big asset to the community and to the country, because she looks out for everybody and anything that needs to be saved,” longtime friend and neighbor Tom Nakashima says.  Jean is unabashed about her work.  “As long as I’m here above the ground, not under it, I’m going to be fighting,” she says.  “It’s not for me that I’m doing all this.  We always need to be thinking about the future.”

Watch and listen to Jean’s Full Story in her own words: Concrete California