Luckily, Jim had an idea.  An idea he remembered seeing in the newspaper, decades ago.  An idea that he hoped would determine, forever, the fate of his treasured family farm. That idea, placing a legal protection on the farm called a conservation easement, would ensure his farm stays a farm, forever.

There was just one problem.  Jim didn’t know who to call.  He didn’t know who could help him with his idea.  Being 93 years old and a little worn around the edges, Jim wasn’t exactly a Google expert.  But he wasn’t going to let that stop him.  Determined, he crawled behind the wheel of his 1986 Mustang and made his way – slowly – to the library.  There, he did what any 93-year-old on a mission would do.  He “went through all the papers and came to the article” that gave him the idea, all those decades ago.

And when he finally came to the article, Jim knew who to call.  And when he made that call, Jim knew what would become of his family farm – even without him. 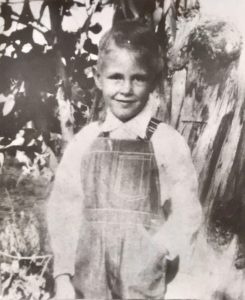 That call protected Jim’s farm, forever.  That call ensured that it won’t become a parking lot, or be divided into pieces too small to farm.  That call was to the California Farmland Trust.  After a three-year long process, the California Farmland Trust now holds a conservation easement on Jim’s property – with a promise that we will always be there to make sure it’s still a farm.  That call gave Jim the faith he needed –  now he knows what will happen to the farm without him.

You see, to Jim, the family farm isn’t just a farm.

To Jim, the family farm is his heritage.

To Jim, the family farm is his history.

To Jim, the family farm is his home. 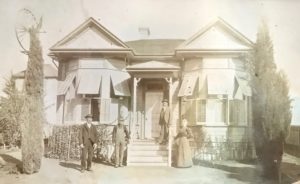 Jim is part of the youngest of four generations rooted on the farm, which has been in the family since 1855.  “Nobody bought it, it was handed down from originality.  He [Jim’s great-grandfather, Joseph] was on the right side of the Civil War, or he was a good fighter in the Civil War,” Jim told me, standing in the farm yard on a grey, drizzly October day, his shoulders hunched and baseball cap drawn low against the sprinkles.  “When he came out here, they said you can have 160 acres.”

Digging through a rich family history carefully compiled by Jim’s sister-in-law, Jean, I learned the farm’s full story.  Born in Indiana in 1820, great-grandfather Joseph made his way to California and arrived in Placer County in 1850.  After a short, not so successful stint panning for gold, in October 1855 Joseph began running 200 head of cattle on the 160 acres he would eventually own. For five years he even ran a profitable hotel on the property.  In 1861, Joseph spent a year fighting for the Union in the Civil War.  His official reward for his service was a scrip, signed by President Ulysses S. Grant, that made him the owner of those 160 acres.   The only cost to him (besides his year of service) was the fee for recording the scrip with the county.

Joseph went from running cattle, to a small dairy and “through all changes did some general farming, which is the only thing which abides with him” (according to the 1890 book, History of San Joaquin, pp 254).  Eventually, the farm was passed along from Joseph to his son, Chester. Chester was known for driving his horse and wagon into town on Saturdays to sell his award-winning fruit.  And Chester eventually passed the farm to his son, Edwin, Jim's father.  Edwin started the dairy Jim grew up on, and planted the walnut and fruit trees that would eventually become Jim's legacy.

In 1922, Jim was “hatched,” (as he puts it, he has a charming tendency to purposely use words that aren’t quite right) on the farm, which by then had dwindled down to 80 acres.  In those days, the farm was home to Sunny Brook dairy, fondly remembered by the family for its catchy slogan "You can whip our cream - but you can't beat our milk!" and advertisements featuring a dog chasing the milkman.  Unlike the ads, Jim remembers his childhood on the dairy with “not too much fondness.” And it’s no wonder.  He “had to get up before breakfast, go get the cows, run ‘em in, juice ‘em, clean out the barn…and go to school.”  And after school, well, he’d “come back, do it all over again.”  That was life for Jim, from first grade until the war that changed everything.

The war that changed everything for Jim was World War II.  With big dreams of being able to drive (as he puts it) a plane (for

free!), he joined the Army Reserve.  After a year of training, he was eager to drive supply missions back and forth across the ocean… only to learn he’d be staying in Visalia as a flight instructor.  After the war, Jim drove home (this time in a car) and became a driving instructor.  Eventually, Jim and his two brothers inherited the farm.  The three managed the farm together for many years, until brothers Bill and Bob became too ill to continue.  Not wanting to see the land dwindle away anymore, Jim scraped together the money to buy out his brothers.

With the family farm entirely his, Jim continued the work of his ancestors. He now has acres of walnut orchards and cherry groves.  And where the Calaveras River won’t let him farm, the ground was put to good use by planting more than 300 valley oaks.  “We’re trying to make that north 40 out there into a full-scale wildlife habitat,” he explains.  “Sometimes it don’t rain too much, you don’t get too much water.  But when it does you have all kinds of wildlife down there. Mostly birds – mudhens, geese, wild ducks.  Hundreds of them.” 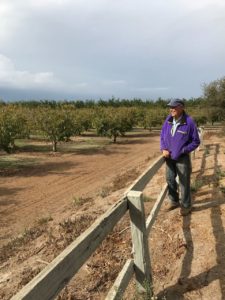 Jim looks out over his cherry orchards. 2018.

The birds aren’t the only creatures with a claim to Jim’s land.  With three children, and too many grand and great-grand children to count, Jim has no shortage of heirs.  But he knows those heirs aren’t all attracted to the farming life. He remembers his own struggle to keep the farm’s remaining 80 acres whole, under one owner.  “It’s been handed down so many generations, and I didn’t want to be the first to knock it off.  I could sell it right now, you know, and that’d be the end of the line.  But I can’t do that.”  Jim shakes his head as he says this, dismayed by the thought of his farm dwindling any further. “We haven’t decided on that so far, whose gonna get it,” he says.  A mischievous smile lights his face and he chuckles as his mind stumbles on the answer to this question. “I might give it to Goodwill!”

Whoever gets the farm, Jim is now 96 years old and resting easily, because he knows the farm will always be a farm.   He knows it won’t be split into little pieces, or paved over.  He knows CFT will always be there, to make sure the farm stays a farm.  To protect his heritage, his history, his home.

Hear the story in Jim's own words: