Mike Tanner knows because he and his family have been growing them since the 1920s. Mike (pictured center), a farmer in Merced County and 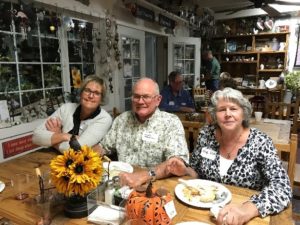 volunteer property monitor for California Farmland Trust (CFT), recently worked with CFT to complete an agricultural conservation easement on his family farm. Mike’s family came to Ballico, CA in 1922  from Hayward under a program called the Ballico Unit of the Delhi State Land Settlement.  It was open to WWI veterans and others to help settle this barren part of the Great San Joaquin Valley.

“At that time all that was in here were sand dunes, tumble weeds,  puncture vines, Jack rabbits, and slightly rolling hills,” said Mike. The family established a dairy and diversified farm growing permanent pasture, alfalfa, silage corn, grapes, almonds, a large garden, blackeye beans, honey bees, and more.  Being like a desert, a water source was a must and was provided by the Turlock Irrigation District from Don Pedro Dam on the Tuolumne River via canals and concrete pipe lines.

“My grandparents and family were extremely hard workers,” said Mike. “My mother was the oldest of four girls and they all were involved with the ranch work especially hand milking the cows twice a day.”

Mike now own’s his mother’s part of what he fondly calls the “Old Homestead” and the rest is owned by his cousin.  It is planted to all almonds and has been since 1964.  “I have been involved with the ranch and its operation all my life,” continued Mike. “As we near the 100 year anniversary for our ranch, I am extremely proud to have been a part of it and for getting it placed into an agricultural conservation easement with the California Farmland Trust!”

Mike is a long-time advocate for saving our best agricultural land for the production of food, fiber, and other products to sustain our lives. “One of the ways to do so is for willing farmers to place their lands into an agricultural conservation easement in perpetuity,” said Mike. “I have chosen to do so as a tribute to my grandfather and grandmother, on my mother’s side, and their legacy.”

A little more about the crunchy nut… 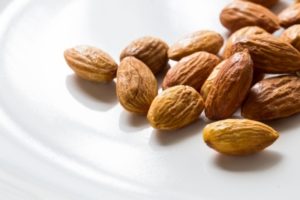 Crunching into an almond, it’s hard to imagine the journey that little nut took to make its way to your mouth. Almond farming is a long-term commitment. Orchards generally produce for 25 years, yielding their first crop three years after planting.

Downtime: November through January, almond trees go through a period of dormancy

Growing Up: From March to June, almond kernels mature and grow to full size, with the shell hardening around it—both protected by a fuzzy outer hull.

Cracking Open: In July, almond hulls split open, exposing the almond shell and allowing it and the kernel inside to dry.

Harvest: From August through October, mechanical tree “shakers” harvest the almonds by vigorously shaking them to the ground.

Here is a sweet and yummy recipe to try today! Cinnamon Roasted Almonds