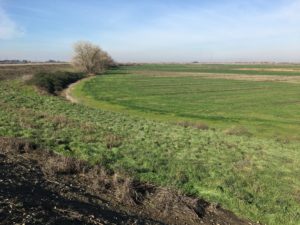 Farming and family go hand-in-hand, but like every relationship, sometimes this pairing is strained. Chris Borello grew up on the family farm his immigrant grandfather founded, but his father guided him away from the land because it’s a hard lifestyle. His father was so successful that now, of 12 in his generation, Chris is the sole farmer.

Currently, Chris farms mostly walnuts, cherries, and peppers, along with 300 head of Black Angus cattle. Chris studied political science and urban planning, thinking real estate would be his vocation. After five years, Chris realized real estate just wasn’t his passion. Armed with knowledge he gained studying and selling, he leased land and went back to the land, growing hay in Santa Clara County. Here, Chris serves on the Santa Clara County Farm Bureau board and encourages the community to learn about agriculture at his 15-acre u-pick cherry operation. He loves being able to provide an educational agriculture experience, where lots of kids come out and can learn where their food comes from.

Recently, Chris worked with Central Valley Farmland Trust to place a conservation easement over 100 acres near the city of Stockton. The property is all prime farmland, the most precious and rare kind. The land has been mostly row and field crops; Chris plans to plant hay soon. As a business minded farmer, Chris recognized and appreciates the crucial role an easement can play in making a farming operation viable and even profitable. Plus, this project furthers his family’s legacy and Chris’ life-long commitment to ensuring land remains open and productive.

“We are happy to have helped Chris and his family to further his lifelong commitment to agriculture, and ensure the farming operation can be handed down to the next generation,” said Executive Director, Charlotte Mitchell.

Chris appreciates groups like the Santa Clara Open Space Authority, which he believes are symbolic of a transition in the public’s view of land conservation. The Authority is publically funded and works to conserve open space, shifting the burden of conservation from individual landowners to the general public. Like his life as a farmer, his love story is not only charming, but also remarkable. Chris and his wife Mary, pictured at right, have been together since they were 15 years old.

Today, they have three children, a daughter that is seven and two sons ages four and five. Mary was skeptical when Chris wanted to go back to farming, but she supported him. Now, recognizing that family and farming go hand-in-hand, Chris thinks “it would be cool if my kids wanted to [farm].” And with a conservation easement, he’s helped to set up the fifth generation for a successful farming future.