As Long As We Have Enough 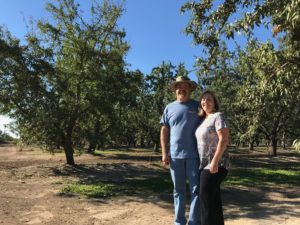 Tom and his wife Irene pictured beside their almond orchard.

“I haven’t been anyplace that I enjoy more than here.”  There is nothing but humble honesty in farmer Tom Ulm’s voice, nothing but sincerity in his eyes, as he admits his adoration for the family farm that five generations of Ulms have called home.

Tom’s grandfather purchased the property outside Modesto in 1943.  Back then, the farm was the dairy Tom grew up working.  Since then, it’s morphed from grapes and corn, to almonds and grapes, to almonds and walnuts.  From one family farm, to two.  From brothers, to uncles and nephews, to cousins.  This rich history is proudly detailed on posters and in photographs lining a stairwell in the family home. Throughout the years, throughout the changes, one element has never wavered – Tom’s dedication to preserving the farm lifestyle. 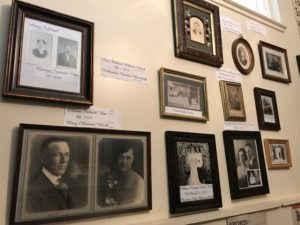 The family picture wall at the Ulm home. These walls capture the stories of the farm over time and the family through many generations.

Tom recalls his early days of being a farm advocate with a modest chuckle.  When he was mayor for a day of his high school, his platform consisted of a simple, resonant statement: No more growth!  Later, when Tom learned he could protect the family farm from the city’s growth with an easement, he encouraged his father to pursue one.  Much to Tom’s dismay, his father, Bill, wasn’t convinced.  That is, until a friend of Bill’s placed an easement on his nearby farm –  then “all of a sudden it’s a good idea!”

In 2011, that good idea became an agricultural conservation easement protecting the Ulm’s 151 acres of prime farmland.  Tom and his wife Irene rest easy knowing that the family farm is safe, regardless of whose hands it is in.  “We would definitely recommend [an easement], if you’re living in an area like we are,” Irene says, sitting in the family farmhouse.  They want to “keep town as far away as we can,” Tom adds, “because right now the possibility is our driveway.”  Tom and Irene are hopeful that more of their neighbors will move to permanently protect their farms.  “We’ve had friends that have sold to development, we’ve seen what it does to them,” Tom notes, “money doesn’t do anybody any good – as long as we have enough to survive.”  Before placing an easement, they advise their fellow farmers to “look far down the road.”  “If you want to keep it there for your kids and grandkids,” protecting the farm 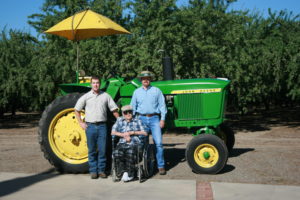 Three generations of Ulm men, Bill seated (passed away in 2012), Bobby (L) and Tom (R). Tom and his son restored the 1969 John Deere that Tom learned to feed cows on.

with an easement is “the ideal thing to do.”

When asked whether the easement protecting his farm has impacted how he farms, typically talkative Tom is nearly at a loss for words.  “We’re farming anyway,” he says, “so it hasn’t.”  He is almost amused by our annual visits to ensure the farm is still a farm, in compliance with the protective easement.  To this man, whose idea of a good vacation is avoiding snakes at an Australian almond conference, doing anything other than farming his land is practically inconceivable.

When he began working the farm, Tom took care of grapes during the day and dairy cows in the evening.  Irene also grew up with cattle, caring for her family’s calves after school.  Before he took over the family farm, Tom worked for Foster Farms, a career move mandated by his father Bill.  The lessons Tom learned on both farms have stuck with him.  “I’ve always been a big fan of working with the guys, not over them,” he says.  “Whatever they’re doing, you need to do it.”  And before Tom’s son, Bobby, began working on the family farm, he too was required to work on another farm. 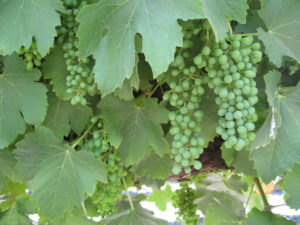 Over the years, Tom’s crops, and the technology he uses to grow them, have evolved.  He fondly points out the old tractor, once featured in a newspaper photo accompanying an article on the family, now enjoying its retirement next to the relatively new barn.  Constructed of repurposed shipping containers, the barn is itself an innovation, as is the equipment it holds.  After fifteen years of monitoring water conditions with digital in-ground probes, last year the Ulms moved to using pressure bombs to sense moisture in leaves.  Getting a more direct picture of the trees’ state has allowed Tom to be more strategic in his watering practices.

Today, Tom is happy to be on the land he loves, with the family he loves, doing a job he loves.  “It’s a world all it’s own,” he says.  “Living out here is not like the rest of the world.”  And he wouldn’t have it any other way.

In this week’s Almond Update, we hear about one farmer’s decision to place an agricultural conservation easement on his property. Sabrina Hill talks with Tom Ulm, president of Ulm Farms in Modesto.