“It’s been a good life,” Pete says softly with a wistful smile.  He and his wife of 63 years, Kathy, are seated at their oak kitchen table, where they still welcome friends every Friday evening.  At 89, Pete’s voice is sometimes so soft his listener has to lean in to hear him, but his blue eyes still light up when he talks about their ranch, which has now been in the family for 100 years. 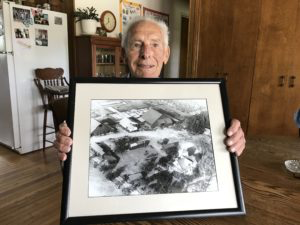 For Pete, a good life is one spent on the land his father purchased near Modesto in 1918. Not much of a traveler, “Pete was ready to stay at home the rest of his life when he was only 30,” Kathy chuckles with a sly look at her husband.  “I pretty much enjoy the ranch, and Kathy’s fixed up the house pretty nice here,” Pete explains with a modest shrug.  He and Kathy raised their four children on this farm where Pete has lived his entire life.

Now, 100 years after it came into the family, the farm is still the center of Menghetti family life. Pete and Kathy mark the years not only by the ages of their children, but by the crops they grew.  In 1958, the year their second child was born, Pete decided to plow under his year-old grapevines to plant almonds instead.  “To heck with that,” he decided.   At that time, Pete was only the second farmer in Stanislaus County to plant almonds.

“Pete was never afraid to try something new,” says Tim Byrd, CFT Director.  Having grown up on the ranch next door, Tim was always treated like one of the family. For Tim, the Menghettis are not only like a second set of parents, but also very intelligent, industrious people who have contributed significantly to agriculture.  Petestarted his education at Shiloh Elementary, the same tiny country school his children would later attend.  He fondly remembers his school years, mostly because his teacher, Mrs. Simmons, “didn’t take any sass from anybody.  She was awfully fair and square.  I really admired her and learned a lot from her.”

It’s clear the trait that Pete admired in his teacher is one he took to heart.  He and Kathy have fought for agriculture time and again, not taking any sass from anybody.  As Modesto’s population swelledfrom 30,000 people in 1960 to today’s almost 200,000, the city clawed further into its surrounding farmlands.  To slow this urban sprawl, Pete initially joined the Planning Commission, but soon decided he was not cut out for so many meetings. He then worked to get his neighbor, Bill Ulm, elected to the Stanislaus County Board of Supervisors in 1973.   With Pete and Kathy’s unrelenting support, Bill was instrumental in implementing A-2-40 zoning, requiring parcels to be at least 40 acres in order to protect farms and prevent their subdivision into small ranchettes. 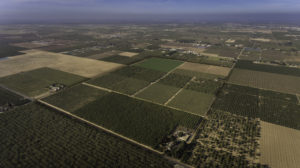 Forty-acre parcels provided a strong start to protect farming, but that wasn’t enough for Pete and Kathy. Tim Byrd describes the Menghettis as “absolutely committed to agriculture, committed to the county, and lovers of our community.”  As the Bay Area economy boomed, it created an all-consuming demand for housing.  Pete and Kathy were dismayed as they watched the world’s best farmland being decimated to provide housing, strip malls, and parking lots for the nearly 400,000 people who came to live in the county from 1960 to 2010.  So in 2007, when the Menghettis found out they could protect the family farm forever from both division and development with an easement, Pete immediately called CFT.

Because Pete and Kathy were so certain that protecting their land was the right thing to do, they approached their neighbors, Bill and Marilyn Ulm, about doing the same. Initially, the Ulms were skeptical.  But as they saw more affordable housing built nearby in response to the 2009 Great Recession, they ultimately decided it was the right thing to do. “I had to talk to Bill for quite a while to convince him that was the way to go,” Pete recalled.  In 2011 the Ulms put their 150 acres in the Farmland Trust to permanently protect them from urbanization. 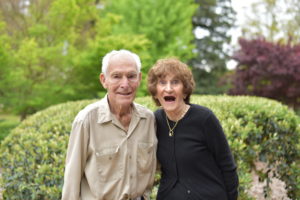 Pete and Kathy are still enjoying a good life.  They’ve protected 310 acres of the world’s best agland and were instrumental in ensuring Stanislaus County’s farmland doesn’t become a jumble of ranchette “farms” too small to feed our growing population.  But they have more to do.  The Menghettis and the Ulms have the only permanently protected farms in Stanislaus County.  “I can’t believe more people in Stanislaus County aren’t in the Farmland Trust” Kathy lamented with ashake of her head.  She and Pete hope more people will support farmland conservation because, as Kathy says, “We’re still farming, we’re still eating.  And if we want to keep eating, we have to keep our land for farming.”  That’s Pete and Kathy: They have spent their lives not just farming, but also promotingand protecting farmingas a way of life. They have enjoyed all that farming has offered their family, their friends, and their community.